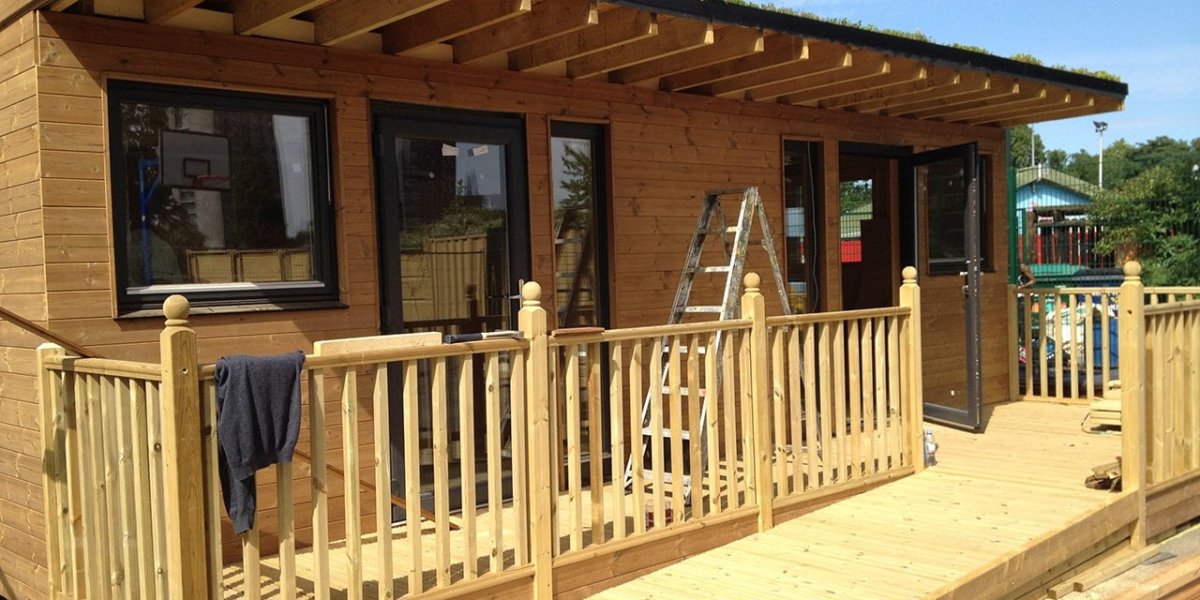 Over the summer, Habitat for Humanity have been working at the Charlie Chaplin Adventure Playground (CCAP) in Kennington. We have been able to carry out essential maintenance and improvements to the landscaping and play equipment. With the financial and practical help from corporate supporters we have also been able to provide a purpose built office facility which was opened on August 20th.

Lucy Coates from our team carried out an interview with Beverley Salmon, who runs the facility. This focuses on the difference that has been made by the project.

CCAP was set up in 1979 by Lady Chaplin – one of Charlie Chaplin’s former wives. The idea was to create a safe space for handicapped children in Lambeth to play and engage in social activities. It has since been working to maintain the ethos created by Lady Chaplin.

Bev tells Lucy about the difficult and often labour-intensive work they carry out to ensure all the children they care for get the most out of the after-school and summer holiday programmes they run. “Wheelchairs are one of the easier issues” she says – the kids they work with often come with much more complex problems, such as being nil-by-mouth and having to be fed via trachea or stomach tubes; some have severe epilepsy and come with nurses; and many have severe autism, making their behaviour erratic and often difficult to control. Because of the nature of their work, “we have to work on a 1:4 ratio, or a 1:1 ratio with kids that have more serious disabilities. It’s important that there’s inclusion for those children.”

Although CCAP receives funding from lo cal authorities, it is not entirely sufficient to cover the huge maintenance costs the project needs to keep the site safe for play, let alone developmental work. CCAP used to cover these costs by running site days themselves, and having volunteers in to do the work they needed, or to contribute to cost of materials. However, Bev says it was hard to run site days independently as it took time out of them planning activities for the children. This is where Habitat for Humanity came in.

“We initially came into contact with Habitat for Humanity when we needed someone to knock a wall through. They were really interested in our project, and the ideas just started snowballing – toilets for staff, a computer room, a music room, expanded office space… because they took on running our site days the pressure is off our shoulders, and we can focus on our job of looking after the kids, we used to have to take time out to plan and organise.”

Due to the nature of their work, the playground “has to be indestructible,” and despite its age, it certainly looks it. She says the HfH workers have “intimate knowledge of the site” and “know the problem areas” so she trusts the works they carry out will be in the best interest of the project.

“They recognise and realise the value of this place, and have always communicated with us and kept us on board.” She then points out the various works that have been carried out; “Now we have a separate kitchen building, so there’s more room in the main building.” She points out how the volunteers’ work has made it “look good and look safe.” She says “the volunteers do a phenomenal job… when corporate groups come in and make it safe, that’s when we can be open… they are part of what this service is.”

Her energy and passion for CCAP is infectious, and certainly the magic of the project has impacted many of the corporate volunteer groups that come in. With funding cuts affecting many council-assisted projects, there was a time where finances were becoming too weak for them to continue their work in the extent it was needed.

But with the enthusiasm and support of groups like Genworth, who sponsored the construction of a new building; ARUP, who have undertaken many landscape enhancements this summer; and the GLA who provided project support funding to help receive planning approval, CCAP have been able to thrive and continue their brilliant work.

And it was through the work of Habitat for Humanity that these groups came into relationship with the project:

“The partnership with Habitat has been the project-saving turning point that CCAP needed… Without the work of Habitat for Humanity, we can’t do what we’re doing in the way we need to.”