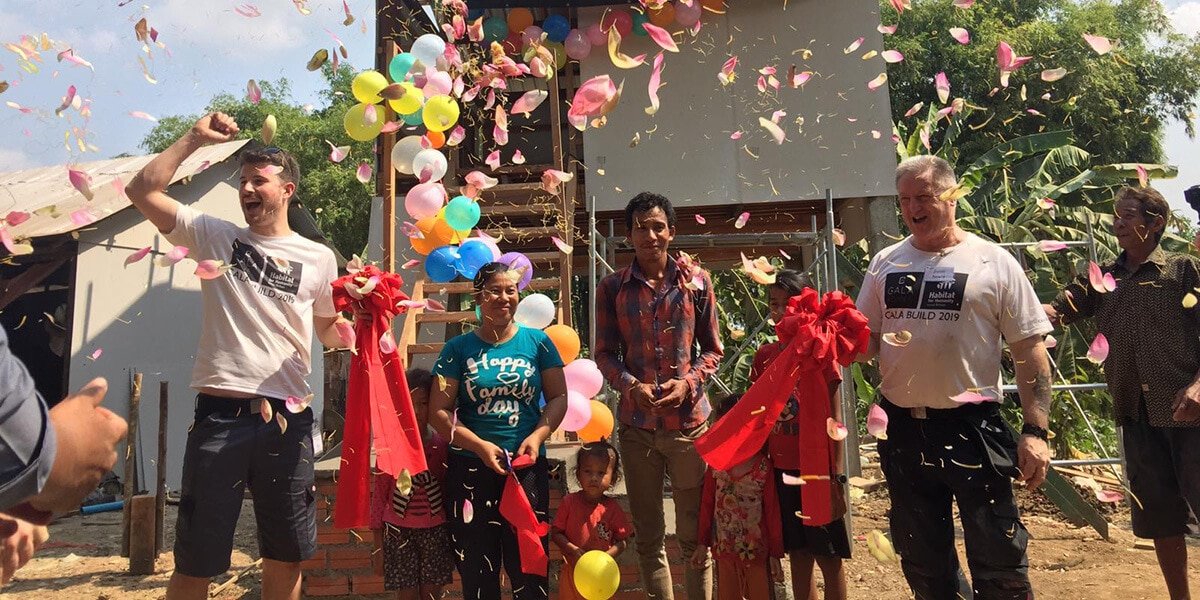 In February 2019 CALA Homes sent a team of volunteers to build homes with Habitat for Humanity in Cambodia. The team were to build a family home for a family of six; Chea Sol, his wife Yat Yen, and their children, Sal Rasy (ages 10), Sal Rady (aged 7), Sal Makara (aged 4), and Sal Rany (aged 2).

Prior to the CALA Homes team arriving in Cambodia, Chea Sol and Yat Yen’s main source of income was through fishing activity. The couple would catch and sell their harvested fish to provide for themselves and their children.

Unfortunately for the family, but not uncommon for families in the Ek Phnom District, a large proportion of their income was spent on renovating and up keeping their home.

The family also faced financial pressure to pay back money that they had borrowed to put towards growing crops which were devastatingly flooded. In May 2019 the family realised that they would need to earn more money to sustain their family, and pay back the borrowed money.

To find better employment opportunities and increase their income they decided to emigrate to Thailand for a couple of years to work alongside Yen’s brother who had already moved to Thailand to earn an increased wage.

When the team arrived the local volunteers and masons were finalising preparation of the large concrete posts that would form the stilts of the house. The family were living with their neighbours as the old home had been knocked down ready for the new home to be built.

The family’s original house was constructed with corrugated sheet metal which was poorly insulated and leaked frequently during bad weather. Any minor flood cause major chaos for the family due to the house being so close to the ground and full of holes and gaps.

As the CALA Homes team entered the community they were welcomed by the family, their friends, and their neighbours. The Team Leader, Katie recalls that “Everyone was super emotional and excited to meet us”.

Throughout the week the team progressed well with the building with the help of the Chea who was keen to get stuck in with the construction. During the day the rest of the family would cook and help wherever and whenever they could.

Despite the intense heat and difficulties digging the near-never ending hole for the toilet the team ended the week with only a few small pieces of construction left to finish by the local masons.

Following the volunteers departure, Chea Sol and Yat Yen’s four daughters have moved into their newly constructed stilt home along with their grand parents.

When asked about their first impressions of their new home the family said that the house looked ‘beautiful and strong’. Yat Yen went on to say that “…The house is strong enough to protect us from any harm, and the children don’t have to sleep with rain pouring onto them anymore.”

Yat and Chea are still in Thailand working to earn sufficient funds to repay the money for the crops. Whilst sad that they are not yet able to move into their home with their children Yat and Chea can work harder and pay off their debt faster knowing that their children are living in a safe and secure home.

Twice a week Yat and Chea send updates to their daughters, and are more committed than ever to send their children to school – with the worries of maintaining an unsafe home a thing of the past.

Two of the four children are not at school age and have become part of the local primary school. Rasy, their eldest daughter is excited to be living in her new home and told us that she wants to be a teacher when she grows up. ” I want to have a good salary to help mum and dad and my sisters.”

Focusing on the future

Chea’s parents, Oum Sao and Mao Vong, are currently caring for the children and share their excitement for Yat and Chea’s new home. Oum Sao says that she is happy for the day that they return to share the family home with the children.

Mao and Oum are continuing to work to assist the family in repaying their debt, and provide essentials for the children. Mao works as a cricket catcher, and Oum is wrapping fish. Both grandparents are keen to set a hard-worker ethic for the children by selling their items to the local market, whilst also keeping some of the produce for their breakfast and lunch.

“On behalf of my son and daughter-in-law we would like to express our thanks to the CALA Homes team and Habitat for Humanity Great Britain for supporting our family to build a homes. We love and miss you all very much.” Mao said.