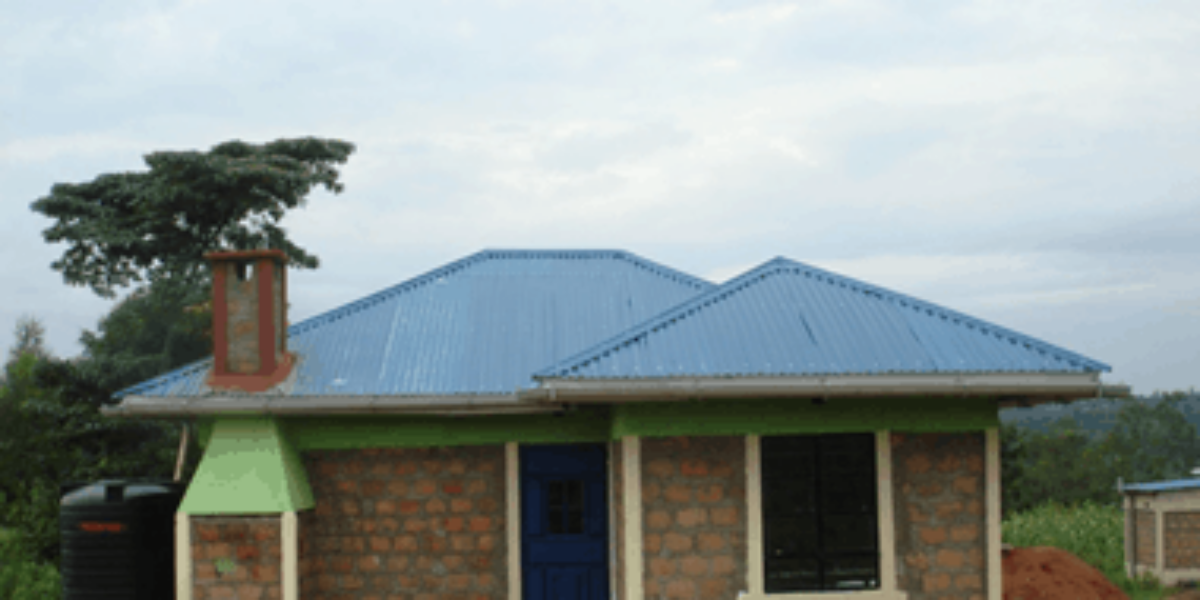 Salina Akuno Odero, known fondly as mama Saline to the rest of the community, is an 84 year old woman from the rural county of Homa Bay in western Kenya.

Following the sad passing of some of her children, she took on the responsibility of caring for 3 of her grandchildren full time – Esther (aged 20), Alphonse (aged 16), and Mary (ages 14).

Prior to the arrival of the Homes for Scotland team, the family had to collect water from the local river and lived in basic conditions with a rusted corrugated roof. Despite having no decent toilets or water source the family remained positive, but despite their positive Saline knew that something needed to be done.

Saline had heard of Habitat for Humanity from others in the community, and approached a community representative to ask for help. A few months passed and Saline had been shortlisted to receive assistance due to her living conditions and was deemed as a priority.

In April 2019, an energetic team from Homes for Scotland, rallied together by Nicola Barclay, to build a new home for Saline and her family.

The team were welcomed into the community with open arms, song, and dance before they set to work passing the many bricks that would form the new walls of the house.

The team spent their days on site hand mixing cement, laying bricks, tying re-bar, digging, and so much more.  With invaluable guidance from the Host Coordinator, James, and the lead builder, known as Chop-Chop the team exceeded expectations and finished the week at window level with enough re-bar to assist in the next phase of the hose build and a sturdy floor laid and dry.

Building a house does not just benefit the homeowner, and this was something that the Homes for Scotland team would discuss frequently throughout the build.

For lunch, a local technical college prepared food for the team which not only benefited the hungry team, but also assisted the hard working women with putting their hospitality and catering studies to the test.

When in discussion with the community leader, Team Leader, John Midgley learnt of how the water tank that would sit beside the new house would serve many families in the area, and how the toilet would also be happily shared by Saline with her neighbours who did not have one.

A wider impact was also very clear to see when working with the local volunteers. Each of them listened intently to Chop-Chop’s advice and teachings as they learnt new skills that they would not only use to complete the house but to also go on and find new opportunities for work in the construction industry.

Since the Homes for Scotland team left Homa Bay the ‘Chop-Cop’ and his incredible team of workmen completed the final construction phase of Saline’s new home of which she is very proud of.

The old family home consisted of one open plan room with a single door and a single hole in the wall that acted as a window. Much to the relief of Saline windows have been installed into each room of the house which will give the family much needed light and ventilation as well as being secure and lockable.

Saline would arrive at the build site each day in brightly coloured clothing ready to say hello to the team and offer her support wherever she could. It was only too fitting that the house should be bright and light, painted with Habitat for Humanity’s colours to reflect Saline’s love of colour.

Now that the family have a home with separate rooms, Saline is able to have the privacy that she deserves and the children have separate spaces to study.

Not only do the children have space to study, but the addition of the water tank means that they can spend more time studying and less time fetching water for the family.

The new home includes a chimney which will be a huge relief for Saline as she will be able to cook with her house without the fear of inhaling unhealthy smoke fumes.

To the right of the house in the distance a new toilet can be seen. This instillation of a secure and covered toilet will give the family and their neighbours who will share its use the dignity and privacy that they need.