Recife, the capital of Brazil’s northeastern state of Pernambuco, is distinguished by its many rivers, bridges, islets and peninsulas. Recife Antigo, on its own island by the harbor, is the historic old town center dating to the 16th century. With a population of over 200 million, Brazil has a housing deficit that affects 30 million people. Today when you arrive in Recife, what you can’t always see are the many forgotten communities and thousands of displaced families who have suffered to make those views so ‘spectacular’. They live alongside some of the wealthiest families in Brazil but struggle to gain access to decent housing to ensure themselves and their families have a safe place to live.

Habitat for Humanity has recently released a series of youtube videos, showcasing life in Recife, for people who are fighting evictions. The series explores fighting of property developers, living in abandoned & unsafe buildings, being a fisherman in Recife and turning a favela into a vibrant community.

The first video in the Fighting Evictions series explores fighting of property developers in Boa Viagem. A local women called Donna Carmen and her daughter Jessica, tell us what it was like growing up in the area and watching it grow.

” I feel concerned. It’s a bit as if someone is coming towards you. And they just keep coming and coming [closer to you]. You feel strangled, concerned, squeezed. You’re almost suffocating.”

The second episode in the series focuses on Women leading the fight for housing for all in Recife. The video sees women who are leading a building occupied by a homeless movement, being interviewed. They decided to look after thier own rights and move into the building, until it became too unsafe to stay in. The building is dedicated to the late politician and women’s right activist Marielle Franco.

“Here we are all decent citizens, hardworking people in need!”

Episode three shows one of the last communities of fishermen in Recife, who still live in traditional stilt houses. The episode explores how big businesses in Recife are contributing majorly to the pollution in the sea, which fisherman use. This has led to a lack of fish in the sea causing these fishermen to spend up to row all the way to another bridge, just to fish for shelfish which can take them about an hour travel time, just to get to the bridge.

“I wish someone would give me the opportunity to work, whatever job it is. I even have a dream job, but it doesn’t exist around here”.

Turning a favela into a vibrant community (S1 E4)

The last episode in the series explores turning a favela into a vibrant community. An area in Recife which was once a dump was turned into a proud neighbourhood and has now become a model of habilitation for favelas all over Brazil. The area has been able to secure protective status, lower crime rates and get children from the area into university for the first time ever.

“Personally, this project is the best thing that’s happened to me. Today we get by, thank God. I love my home, I love where I live” – Donna- Local Community Leader

Living on the streets of Recife 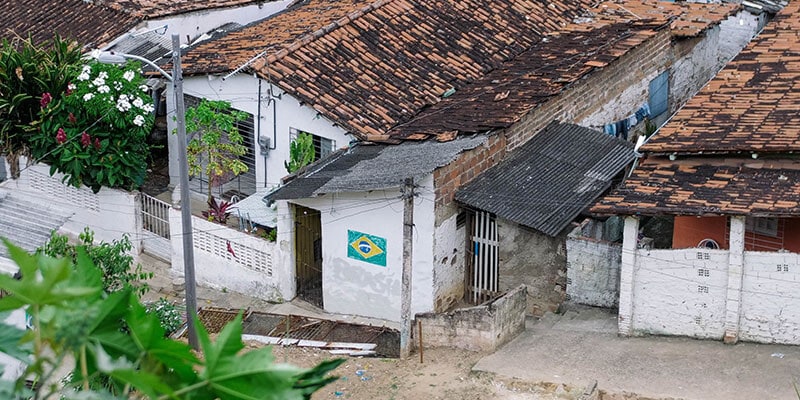 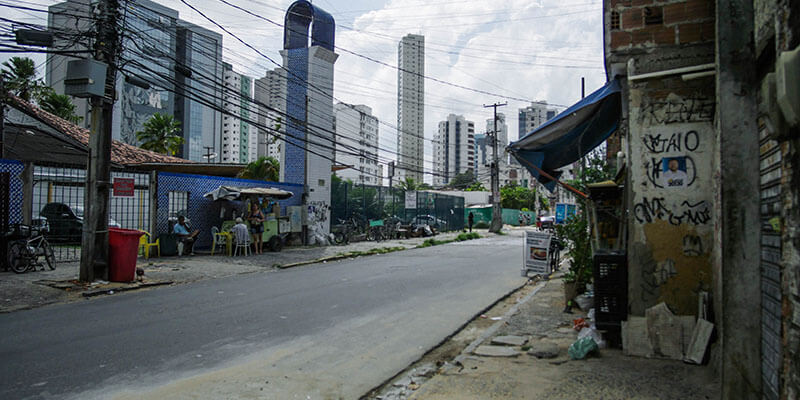 Vibrant and urban, Recife prides itself on its sense of culture and carnaval roots. It was one of the first colonial cities in Brazil, founded in 1537 by the Portuguese and it quickly expanded to become a region with the largest sugarcane production in the country. Like other colonies around the world, the Portuguese needed workers to do the heavy work on the plantations, so the Pernambuco region received around 1 million African slaves to help with sugar production.

Slavery was abolished in Brazil in 1888, but the country gave no thought to where these people would live or go. With no plan or infrastructure in place, millions of people were left homeless and this is the root cause of housing and poverty problems in Brazil today.

“Brazil was the last country in the world to free the slaves. When the slaves were freed, they were just on the streets. From one day to another, they lost everything. They lost their houses. It was an awful situation like being a slave but in a very short period they were without everything and put on the streets.” (Patricia Samora)

Many years later, former slave families who had been working in the countryside started to move into big cities like São Paolo and Recife in search of better employment opportunities and improved living conditions.

One of the richest cities in the world 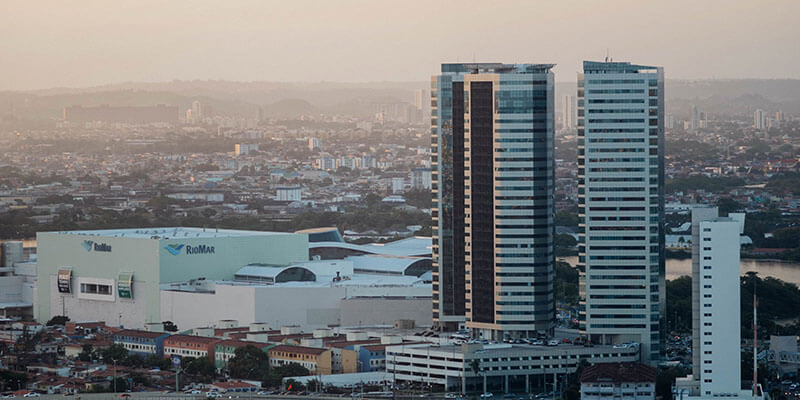 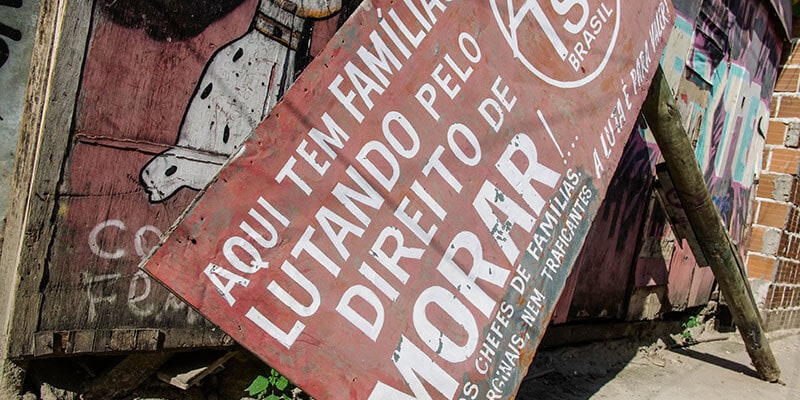 Now, Recife is the 4th most densely populated city in Brazil (behind São Paulo, Rio and Belo Horizonte). There are roughly 60 thousand families in Recife who don’t have a house to live in or live in unsafe and precarious conditions. Although the North-East region of Brazil is one of the poorest in the country, Recife is set to be one of the richest cities in the world.

Minimum wage in Brazil is BRL 940 (about £180). For a low-income family, this will be their entire monthly income, for everything. Renting a small house in a favela costs about £60, which is almost half of the monthly minimum wage. Many families can’t face paying that, so they end up squatting on a patch of empty land and building their own house.

These houses are built terribly as the families don’t have the money or proper tools to built adequate housing. In the past, the Brazilian government developed several housing programs and policies. These programs did help over 10.5 million people, however, with the country’s new political context, these programs have now been “frozen”.

“To occupy is a right, because when you see so many abandoned houses and buildings with no one living inside… Just while we can’t find a home. That’s why we’re looking after our own rights.” (Poliana- MSTS Representitive)

The place to live in Recife if you want to live life luxuriously. But at what price? Recent urbanisation and gentrification of this part of the city has led to the eviction of many smaller settlements. Fisher men, service workers, the people who run this part of the city have been forced out of their homes and forced to leave the lives they’d built for themselves. 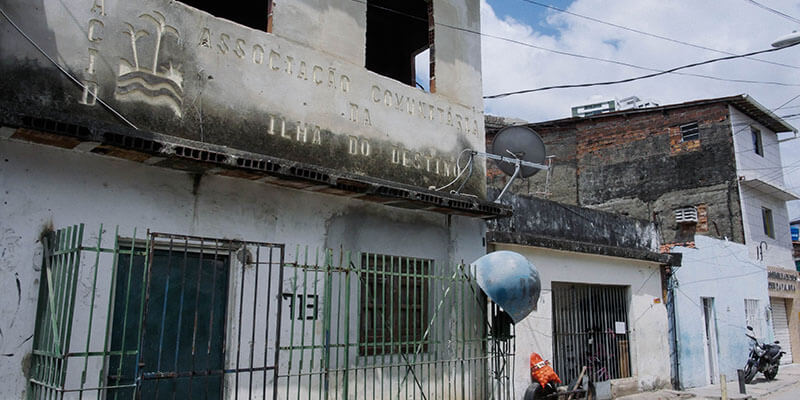 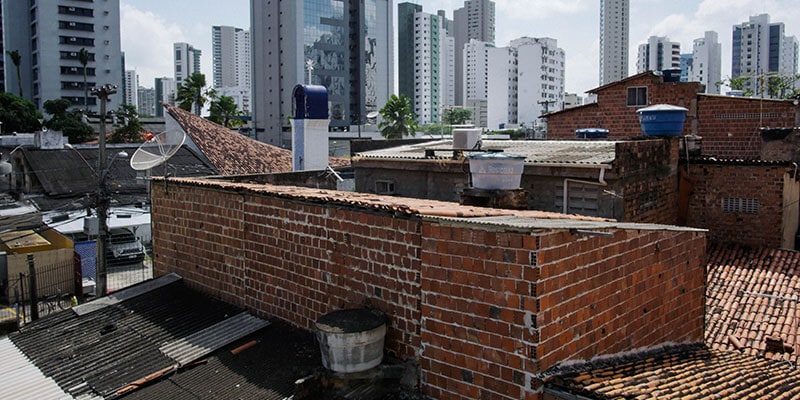 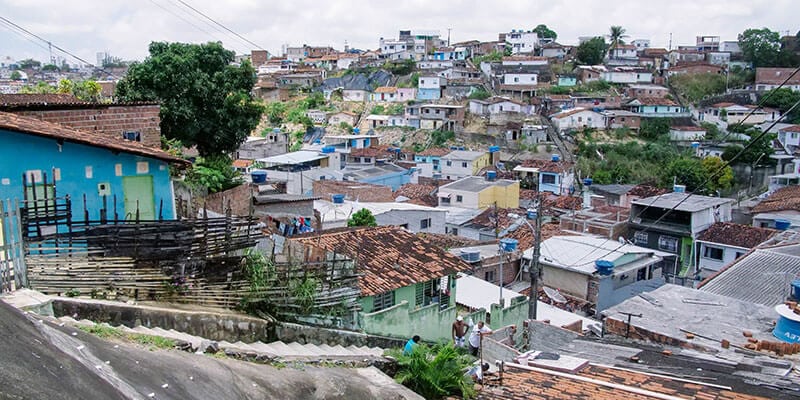 This is one of the original communities of the city, living in what is today the luxurious neighbourhood of Boa Viagem. The families in this community are slowly being evicted, whether it’s through payouts or intimidation, so that new luxury properties can be built. They’re fighting for their right to land, their right to live, but the construction happening around them is weakening their homes and causing cracks in their walls.

This area began as an informal settlement, founded by local workers and fishermen, who had been pushed out of the city by urban developers who wanted to profit from the city’s coastline. But as more and more people moved there from the city, the area gradually became more established and the government eventually granted the residents the right to live there.

Like most favelas in Brazil, Alto Santa Terezinha is built at the top of a hill on uneven and undesirable land. This means that most of the houses are constructed on dodgy foundations

“Sanitation and environmental risks, especially flooding and other landslides. Those are the kind of situations that we are facing in growing urban areas.” (Patricia Samora) 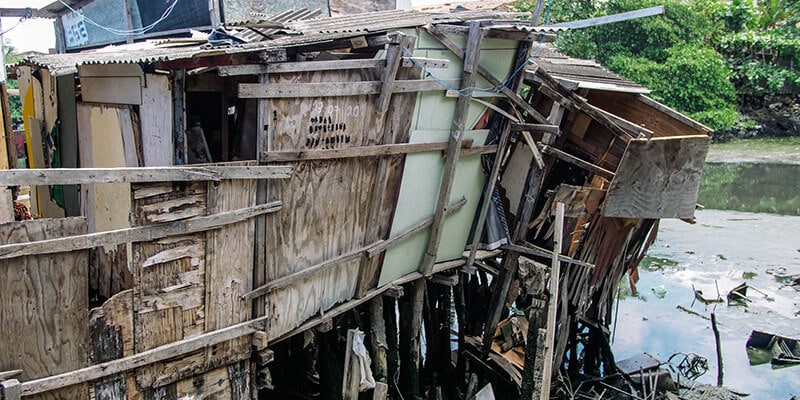 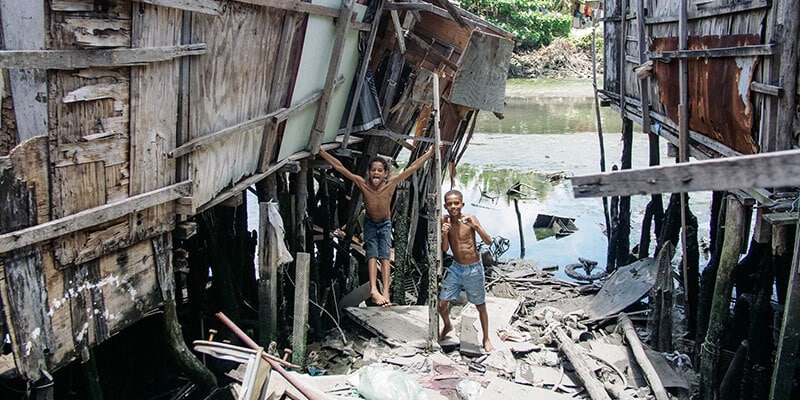 The Palafitas areas follow the edge of the Beberibe and Capibaribe rivers as they flow into the sea; winding around the city in the shadows of the urban landscape they’re easily masked and forgotten.

Traditionally these settlements were formed by the fishermen who lived amongst the natural mangrove habitat to be as close to the sea as possible. However, over the years property developers have built on top of the mangrove covered land and pollution from the urban landscape has destroyed what was left.

“Our Constitution says that the cities are responsible for human policy, housing policy, and so on, but on the other side they cannot rely on constant money coming to face these challenges. So, that’s a contradiction in our political framework at the end.” (Patricia Samora)

The palafitas located in the center of the city are occupied by the MTST: movimento dos trabalhadores sem teto, which translated, means the homeless workers’ movement. Trapped in a world where they have to pay taxes but can’t be found on a map, the residents of these areas are fighting a hard battle against the government to simply exist.

The future of housing poverty in Brazil

So what can you do?

You can support our work by;