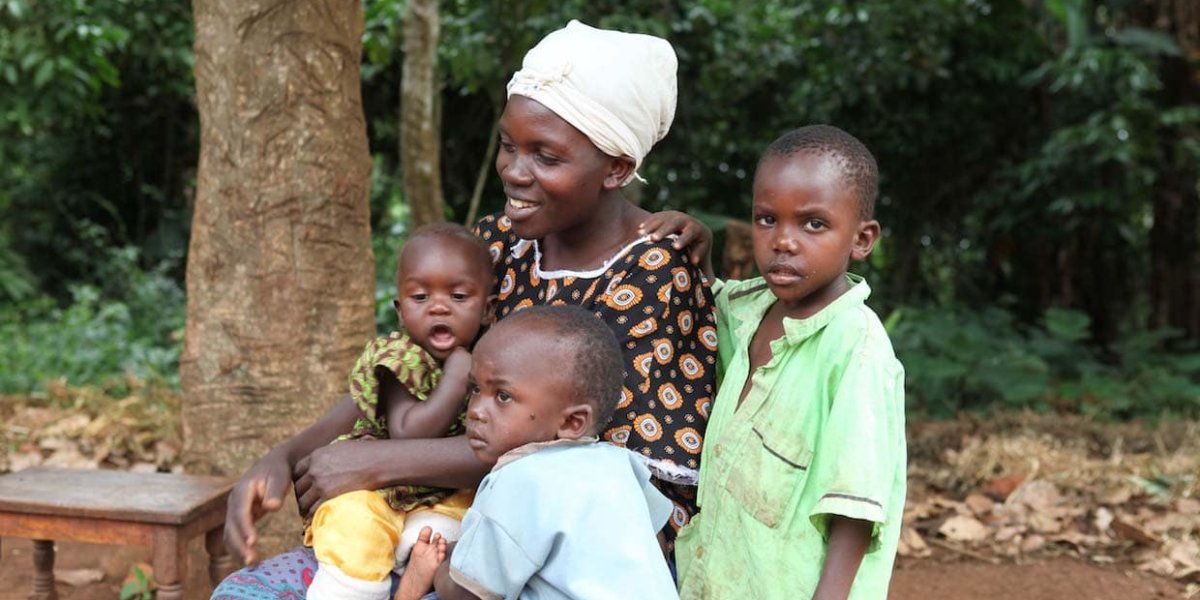 4 Families Improve Their Lives in Uganda with Micro-Credit

In February 2015, the COINS Foundation team returned to the warm and dusty climate of rural Uganda to view our micro-credit projects. They visited a remote village located near the district of Luwero.

Armed with lots of cameras and a huge sense of excitement, their mission was to revisit and capture the stories of five families that they first met in 2012, to see how their lives had improved three years after receiving not-for-profit microfinance housing loans from Habitat for Humanity Uganda.

Inspiring their community – John and Mary

For John and Mary it was love at first sight. In 1980, newly married, they moved into their first home which was a small house made of mud and wattle. Shortly after, the war started, and Mary was left alone, 8 months pregnant, and with the news that her husband had been killed.

When Mary discovered her husband was alive, the couple along with their young daughter Julie, decided to return to where their first house was, to build their new home.

John is a chairman of the Luwero district council in Uganda. He began the role whilst the country was still at war in 1981. He told us that thanks to our support, his family was able to start a new life and inspire others in the community to take advantage of the home improvements loan system/micro-credit scheme.

He is known as “the original solar man” because he’s been able to buy solar panels for his home – a much safer alternative to kerosene or firewood.

“As chairman, I am in charge of all people regardless of the political parties they belong to. This is not about political affiliations. This is about changing lives.”

David and Harriet live with their 12 children in a remote village of the Luwero district.

“If you live in poverty, people are not excited and don’t feel proud of you.”

For this family working hard means providing a good life for both friends and family. In their eyes, a decent home is a sign of wealth and people will respect you more for that. Like Mary and John, David and Harriet have inspired others in the village to follow in their footsteps with the housing micro-loans programme. They told us how they have become a source of knowledge for the community, and they are consulted on how to improve their own living conditions.

A proper home can have a real impact on a child’s life prospects. A hygienic home with plastered walls and clean floors results in less chance of infection, and it means a safe place for a child to study or play.

“You can see all the neighbours passing our house, admiring it, which didn’t happen when we lived at the other house. You feel proud and it gives you respect.”

The gift of life – Joseph and Florence

In 2014 Joseph and Florence sadly lost their youngest son. At only two years old he fell sick with a fever that affected his brain. His illness deteriorated and he stopped growing. His care became extremely difficult, living in this condition only until he turned 15 years old.

After suffering this trauma, the family lost all hope. Their life in the village worsened, not only with the death of their son but also with unfortunate weather conditions leading to bad harvests of coffee and bananas, therefore no money to support the family.

“Today in Uganda, if you don’t have a job, you are going to collect rubbish. You are nothing.”

By obtaining a microfinance loan (micro-credit), the family have been able to lead a better life than before. Florence told us about the Working Women’s group in her village. She explained that all the women gather and motivate each other to work harder and save more money.

“You have to be careful how you handle things as we all find different challenges in our homes. But when you meet your friends and discuss it with them you are able to overcome them.”

After losing their son they appreciate every single moment, the micro-finance loan is a big part of that, slowly giving them the freedom they so deserve.

A second chance – Emmanuel and Teddy

Emmanuel works as a pineapple farmer, he tells us that if the weather is good, over a season he’ll be able to sell around six to seven hundred pineapples, but like most agricultural business, if the conditions are bad, he can end up with as few as two hundred per acre.

Normally pineapples sell for around 1,000USH (18p) each, but this isn’t enough.

“The roof will need seventy iron sheets and I can’t cover that cost with pineapples. Or if I did, I would have nothing left for my family.”

Varying weather conditions, combined with fluctuating market prices, meant that Emmanuel was unable to save enough to complete building his house, which why he applied for a housing loan.

Teddy had been saving money from working on a coffee plantation to finish building a home for him and his family. He had already invested in building materials like vents and cement and was ready to complete the house when tragedy struck his family.

Teddy and his family were returning from a school open day when his wife’s dress got caught in the engine of their motorbike. The bike crashed and one of their sons was left badly injured.

For 2 months his son was in hospital, his condition was quite serious, but luckily his brain wasn’t damaged.

“You don’t think about roofing the house when your child might be dying.”

When the family was finally able to return home, they had no money left. Teddy had spent all his time taking care of his son so he was unable to earn more money by working on the plantation. The bags of cement Teddy bought months ago were no longer of use and he fell back to where he started.

Thanks to a small loan from a friend, and support from our microfinance programme Teddy was able to get back on his feet and think about finishing his house again.