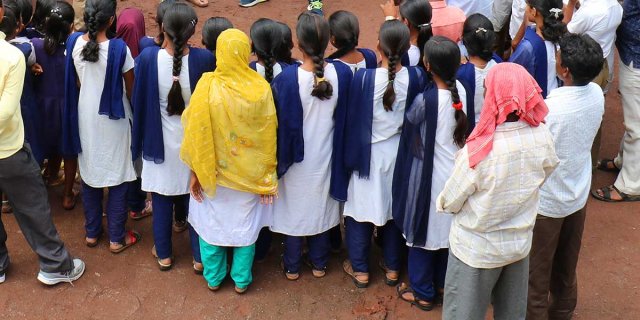 The southeast coast of India is prone to annual flooding and wind damage from cyclones and monsoon rains. Rising sea levels and increased rainfall over the last few years, particularly in the Puducherry region and its adjoining Cuddalore and Viluppuram districts of Tamil Nadu state, demonstrate the effects of climate change patterns. The 2004 Indian Ocean tsunami killed nearly 11,000 people in India and displaced 150,000; about 90 percent of the tsunami-affected population lives in these low-lying areas. Fishermen, dalits (very low-caste families) and other marginalized and vulnerable communities living in disaster prone areas generally lack the knowledge and facilities for safeguarding themselves from the effects of disasters.

They frequently suffer the most in terms of losses of family members and property. Our disaster preparedness and mitigation program was conceived to mitigate such losses, and to educate and prepare residents of these disaster-prone areas.

The program was designed to facilitate capacity building and to empower local communities to address their longer-term vulnerabilities, thus building community resilience. This, in turn, would prepare them to respond to any hazard. In addition, the project included activities to mitigate the impact of a hazard, with concrete structural mitigation components applied to existing houses. Some of these communities were already involved in reducing vulnerabilities (particularly in the social and economic fields) through their own development initiatives.

The inclusion of hazard preparedness and mitigation brought added value to the development initiatives being implemented by other local NGOs in these communities. The program had three objectives:

The primary strategy was to work with local partners that had a long-term presence and interest in the communities. We selected local community-based organizations REAL and GOODWILL on the basis of their capacity, past achievements and long-term commitments toward the communities in which they work. Disaster preparedness and mitigation plans, at the village level, started with a hazard mapping and vulnerability analysis exercise in each village. The exercise used participatory rural appraisal tools, with different stakeholder groups providing perspective on issues related to hazards and their impact on the community. Through a socio-economic mapping exercise, groups were taught to record the impact of past and possible future hazards on the social, cultural, environmental, economic and individual life in their community. The community groups also discussed and recorded the resources and capacities that could be used to respond. The whole process was participatory, with each group taking transect walks through the village to re-familiarize themselves with various resources, landmarks, hazard-prone areas. These were translated into hazard, vulnerability mapping. The findings of the four different groups of stakeholders (women’s self-help groups, men, youth, and other vulnerable people) were brought together by a committee with representation from each stakeholder group to design the village hazard and vulnerability scenario.

Local contractors handled the structural mitigation of houses with participation of homeowners and under close supervision by our technical staff in India. Interventions included buttressing weak walls to improve lateral load resistance of long walls, fitting weather-resistant tiles for sealing flat roofs to stop the corrosive effects of water leaks from compromising the underlying structures, fitting cement lateral bands on the tiled roofs to provide additional stability for houses located in cyclone and high wind locations, installing cistern rainwater harvesting structures for proper drainage and to prevent water collecting around structures, fitting rooftop doors so inhabitants could escape to the roof, and repairing or retrofitting houses to strengthen structures.