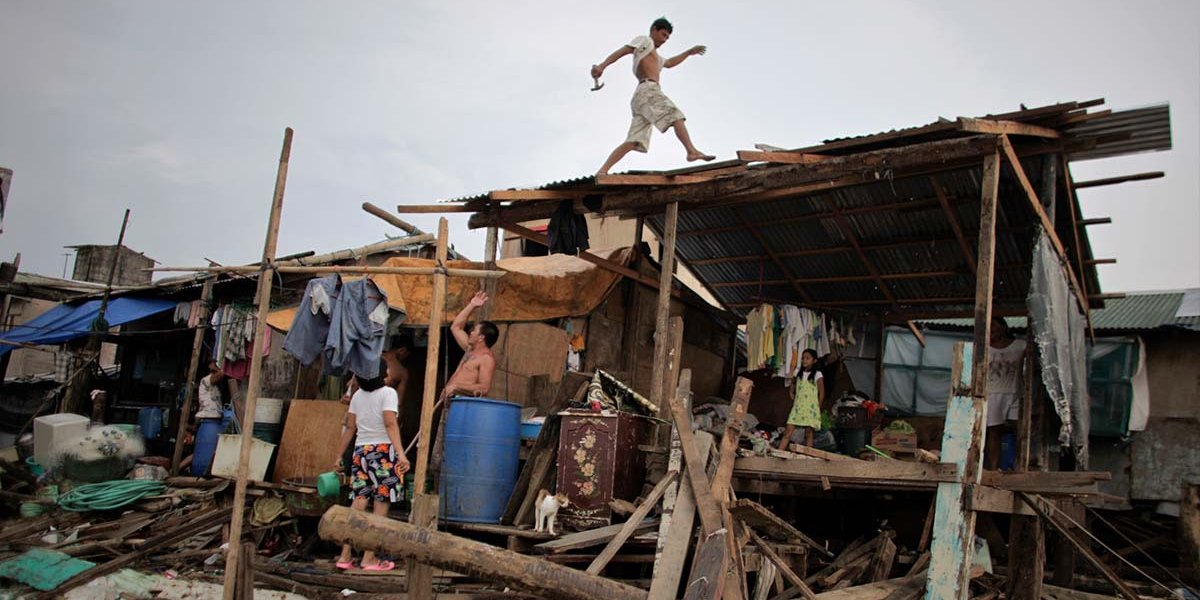 Disaster relief in the Philippines

With around 20 typhoons hitting the country every year, our team is busy building more resilient homes and communities.

We have been active in the Philippines for more than 26 years. In the wake of a disaster, we are among the first agencies to respond on the ground and work with families and communities year round to build resilience to future events.

Known locally as Typhoon Ruby, Hagupit made landfall on Samar, an island in the Visayas late in the evening of Saturday 6 December.

The storm has already affected 492,000 families (2.2 million people) across seven regions with 1.7 million people forced to use evacuation centres.

We had already positioned staff and materials ready to respond before Hagupit made landfall, and sheltered evacuated families in Leyte, Cebu and Suriago del Sur provinces.

While assessments are ongoing, there is significant damage to housing in Eastern Samar which suffered the brunt of the disaster. Early indications suggest that over 26,000 houses have been completely destroyed and another 33,000 damaged.

Taking account of the lessons from reconstruction after Typhoon Haiyan, we will be focusing efforts on early recovery in the disaster phase. By enabling people to return to their homes as soon as possible, we can condense immediate response and longer term recovery efforts and deliver maxmium value for money.

We will focus on the most vulnerable people who do not have the capacity to self recover including the lowest income families, disabled and elderly people, and women headed households. By deploying skilled labour and technical expertise in addition to the tools and materials, we will be make effective and durable repairs to their homes and in most cases improving on the structures that existed previously.

We have already assisted 4,703 families using the accelerated recovery approach Bantayan, Daan Bantayan and Ormoc and a further 3,000 in Guiuan.

By adopting this framework, we will ensure that every penny is spent as efficiently as possible. Please help us to help as many people as possible.

Known locally as Yolanda, Super Typhoon Haiyan made landfall on Samar Island on Friday 8th November and is the deadliest Philippine typhoon recorded in modern history.

In the aftermath of the destruction we helped 18,000 families (90,000 people) by providing emergency shelter and shelter repair kits including:

Our post Haiyan reconstruction and resilience effort continues. We have started work at four reconstruction sites and are on course to build 30,000 typhoon resilient core houses.

Known locally as Pablo, Typhoon Bopha made landfall in Mindanao on 4th December 2012. 6.2 million people were affected and 168,227 homes were either damaged or destroyed.

Our initial response included the provision of soup kitchens, followed by the distribution of cleaning kits and shelter repair kits.

More than half the amount of rain normally seen in August fell in Manila and Luzon in just 24 hours. This caused serious flooding and affected 267,850 families (or 1,230,813 people).

16 people were killed and 53,258 families (242,211 people) sheltered in evacuation centres. 123,595 families had taken refuge in houses belonging to relatives and friends.