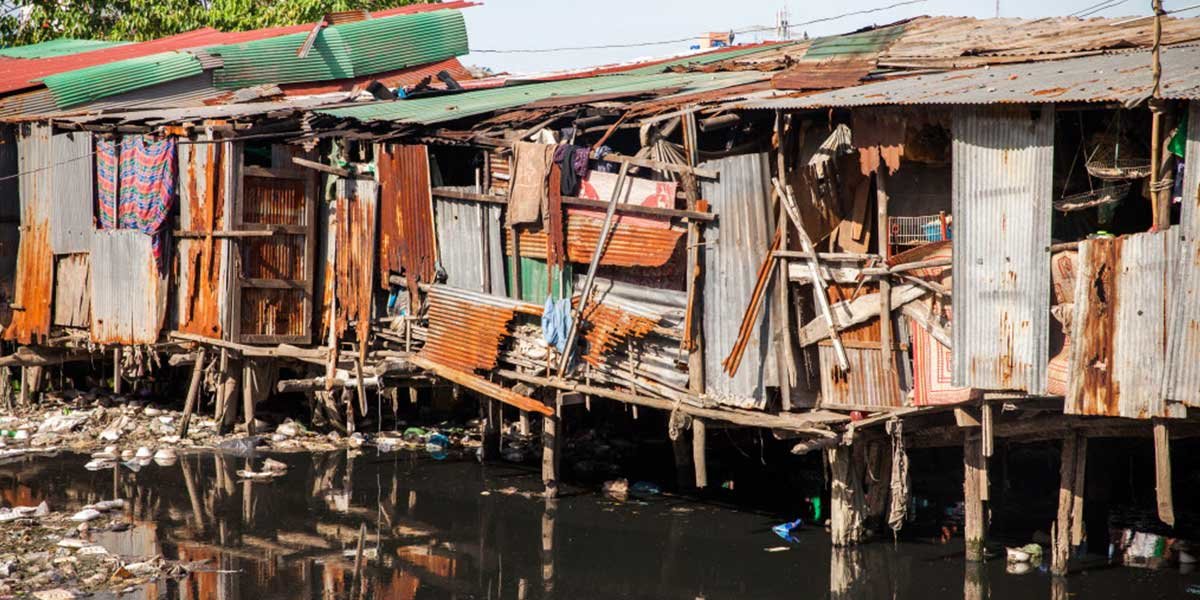 Urbanisation and the Rise of Slum Housing

The birth and growth of informal settlements

“Human settlements are linked so closely to existence itself, represent such a concrete and widespread reality, are so complex and demanding, so laden with questions of rights and desires, with needs and aspirations, so racked with injustices and deficiencies, that the subject cannot be approached with the leisurely detachment of the solitary theoretician.”

The UN Conference on Human Settlements, held for the first time in 1976, was a memorable one.  It was at this very conference that the Canadian Prime Minister at the time, Pierre Elliott Trudeau, set the ball rolling to revise ideas of urbanisation by focusing on settlements from a new viewpoint.

The focus was the well-being of slum-dwellers and their rights and aspirations for a dignified life. One year later, The UN General Assembly established the UN Centre for Human Settlements as an immediate response to the issues raised at the conference.

The aim of this new organisation was to create a way to combine spatial planning with the social, cultural and economic aspirations of the informal settlers. The modern urban development story had found its new protagonist: ‘the humble home’. 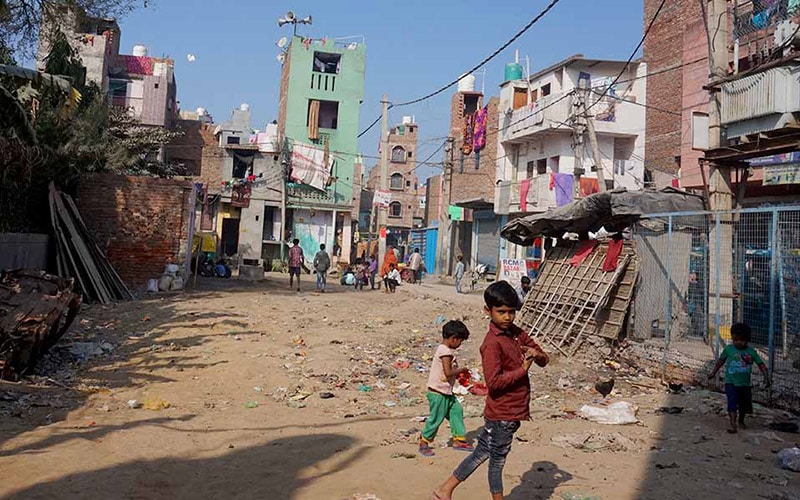 Urbanisation, the process by which cities and towns grow and develop, has provoked its fair share of ‘by-products’. One of the most ‘persistent’ among them happens to be the pockets of poverty and neighbourhood decay, famously called ‘slums’ in most development writing.

As urbanisation initiatives began to focus on homes that are directly related to the well-being of the dwellers, the awful conditions of the slums were more recognised and the prominent challenges were put in contrast.

A closer look and a detailed study of the inequalities that take place in these slums further showed that the slums had been trapped in cycles of poverty and decay for decades. Patterns appeared to outline the growth of these pockets of poverty, which brings us to the idea that if we were to trace back through the birth and growth of slums, we could potentially find clues on exactly how urban development has failed to address the need for a developed and sustainable lifestyle. 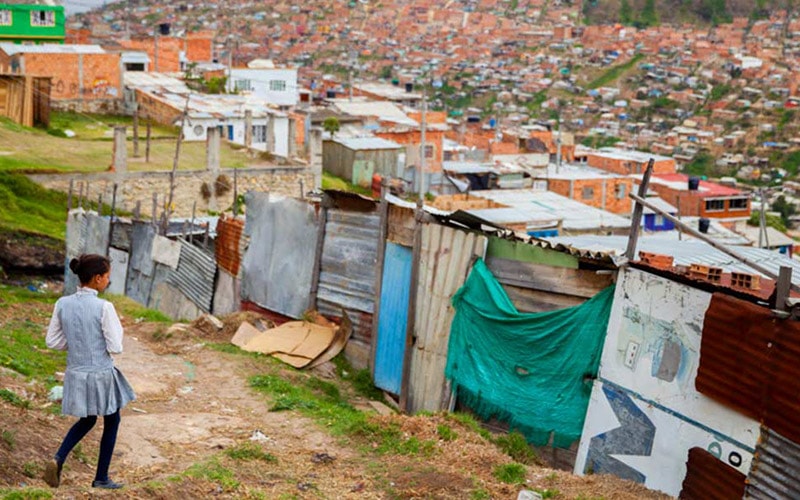 Slums come in all shapes, sizes and have various names, yet they all mean the same thing: an overcrowded residential urban area characterised by below standard housing, poor basic services and squalor.

The word ‘slum’ first came into use in the 1820s. It was used to denote certain locations across London which were known for having the poorest quality housing and the most unhygienic conditions. These locations were reputed for being the breeding grounds for marginal activities including many criminal activities and drug abuse.

By the end of the 19th century, it had started to imply ‘a street, alley, court’, situated in an overcrowded district and inhabited by lower class or poor people.

Sometime during the 1880s, it was the Housing Reform movement in England, which then introduced the idea of ‘slums’ as meaning a house that is “materially unfit for human habitation”.This led to the delimitation of ‘slums’ on city maps for planning, so the idea of marking out pockets of poverty by highlighting low-quality housing areas became widely accepted.

The 20th century saw the word no longer being used in terms of the emerging requirements. Instead, more specific terms were used such as ‘tenement house’, ‘deteriorated neighbourhood’, etc. Moreover, the legislation from the 1890s to the 1930s authorised the removal of the slums and imposed technical, legal definitions and standards for the operating process. 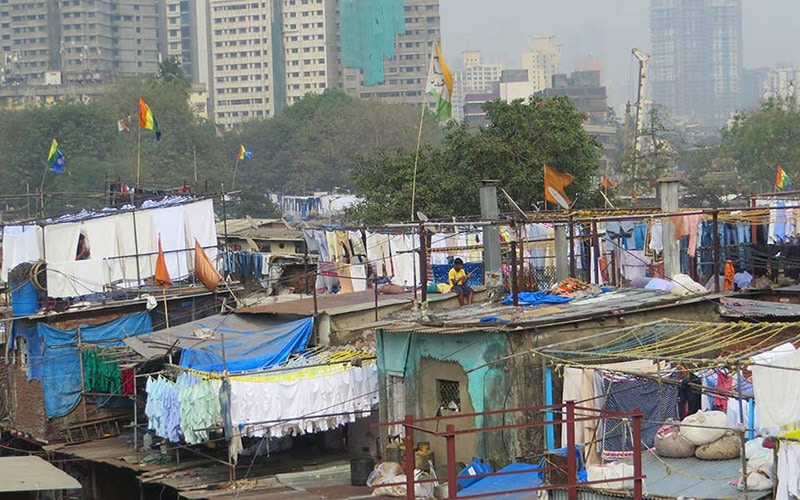 Today, the word ‘slum’ is broadly used to describe poverty housing arrangements all over the world. In developing countries in particular, the term ‘slum’ has come to mean informal housing.

In colonial times the word implied a class division based on a person’s residency, now terms such as slum, shanty, informal housing, etc. are used interchangeably by authorities engaged in development activities that relate to urbanisation.

Although each country has its own way of naming them, the word ‘slum’ has become universal; imposing a certain status upon those who live there:

Most of the world’s largest slums seem to be located across the developing world, and as urbanisation increases so does inequality. In the future slums won’t just be an inevitable challenge, they will start to become obstacles in the way of achieving sustainable development goals. 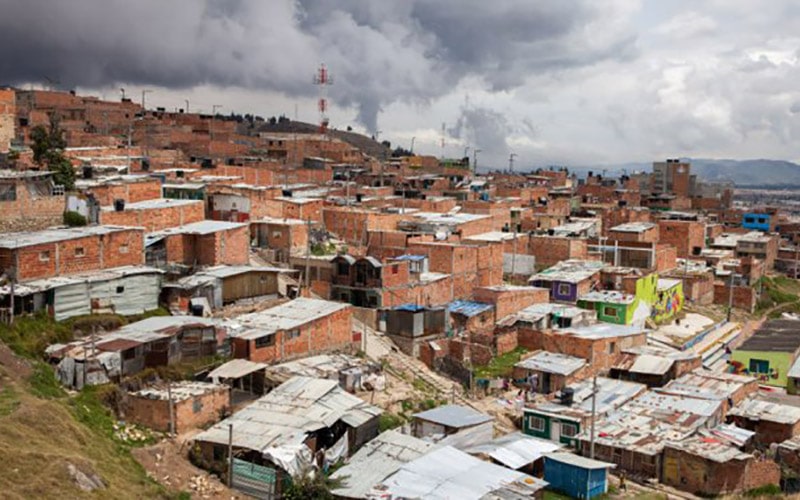 The slums we know today, really began in the 20th century, after the Great Depression. Post World War 2, global economies wanted to calm the fear of another break out of war. Economies started to explore the potential of diverting massive military costs of earlier generations for productive and constructive uses. They saw the benefits of trade and boosted productivity by using new technologies and earned the peace dividend.

The 1940s – 1960s saw a general increase in trade but slowed in the looming shadow of the Cold War. It was only in 1990, with the collapse of the Iron Curtain in Europe, that trade picked up at an unimaginable pace and the world was steered into the era of globalisation. It was also during the famous 1980s and 1990s era that new communication technologies started to improve connectivity, which crucially allowed the developing world to find economic opportunities abroad.

Tapping into new markets became easier and accessing cheaper skilled labour from the developing world became the norm. Initially bridging the gap between the developing world seemed hopeful and prosperous, however, despite the benefits of globalisation, it made inequality and poverty a global phenomenon. As developing nations opened their economies to globalisation, the ideas of progressive taxation, social safety nets and labour regulation gradually became impacted.

Neo-liberal ideas were on the rise – they wanted to generate maximum profit and integrate more markets. As a result, the pace of economic and social growth, especially in developing countries was faster than planned…it was only a matter of time before difficulties started to arise. 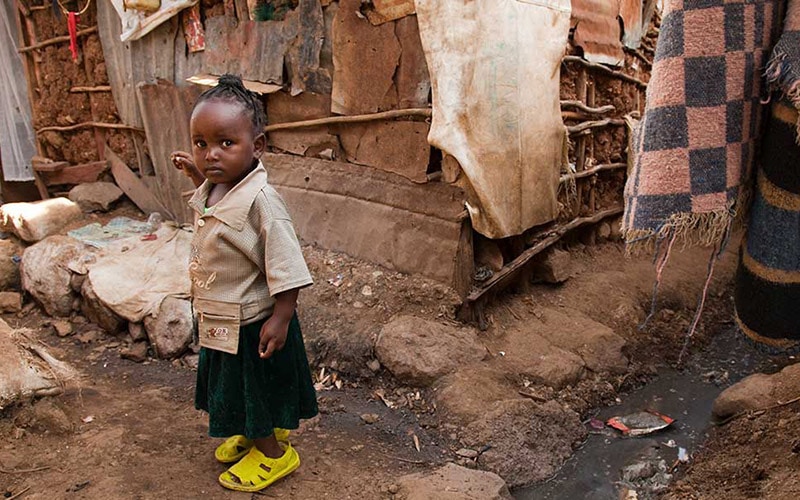 One of the major difficulties that arose during the time was the fact that the state’s role was changing too fast. Having been responsible for a fair distribution of wealth and keeping prices under check, the neo-liberals now found that the state was taking a back seat – to promote wealth generation and improve services in government departments. But without the necessary regulations to keep track of the outcomes, the change was too sudden.

Furthermore, better quality services demanded more spending from everyone’s pocket which was something not everyone could afford. Added to by the service industry’s desire to hire people with a certain level of education alongside specific skill sets was a recipe for disaster for most of the developing economies.

Following these developments, lower-income people from the developing world found themselves rushing towards the informal sector just to survive. Slum-dwellers could no longer earn a decent living and the number of families living below the poverty line in urban areas started increasing as the city’s wealthy inhabitants only got richer. 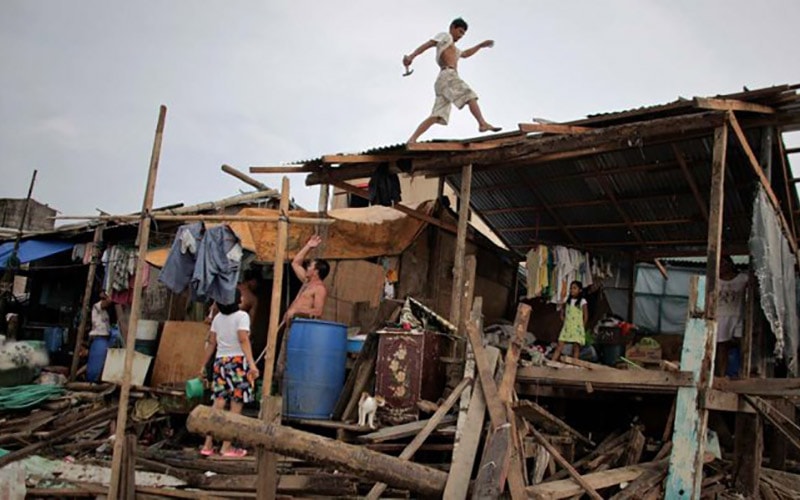 The impact of the recession

During the cyclical phases of the recession even the thriving informal economy in large urban areas suffered, this was when the most rooted slums in the West started to grow in the peripheries of urban life. Research has shown that in long periods of recession more people moved to urban areas but also fewer houses were built so more slums developed.

For example in cities like Liverpool and Sydney where capitalism was on the rise due to free-trading ports, slums were particularly visible during the 1850s to 1890s. As the recession would cause the rate of maintenance and rent of dwellings and infrastructure to fall. Lower income people would take the opportunity to move into these areas as their circumstances had led them into poverty.

Trapped in a cycle of poverty

Gradually, the quality of life in slum areas would deteriorate due to the overcrowding and the cycle would trap more and more people. This is why the unequal distribution of different classes of people, particularly in cyclical phases of the recession has therefore been known to spur the development of slums.

This trend can also be seen in the developing world as more of these newly emerging economies find themselves inclined to engage in a common global formula for trade and wealth generation.

The developing world hosts the major part of the world’s working age population. Under-employment and unemployment in rural areas has spurred major migration patterns to the cities where the informal economy has somewhat provided livelihood to the distressed lot so far.

However, without adequate measures to draw these semi-skilled and unskilled population into the mainstream formal sector, there remains the growing issue of the urban poor gathering to give rise to more slum potent neighbourhoods. The issue is gradually emerging as a trend based on a lack of policy approach. 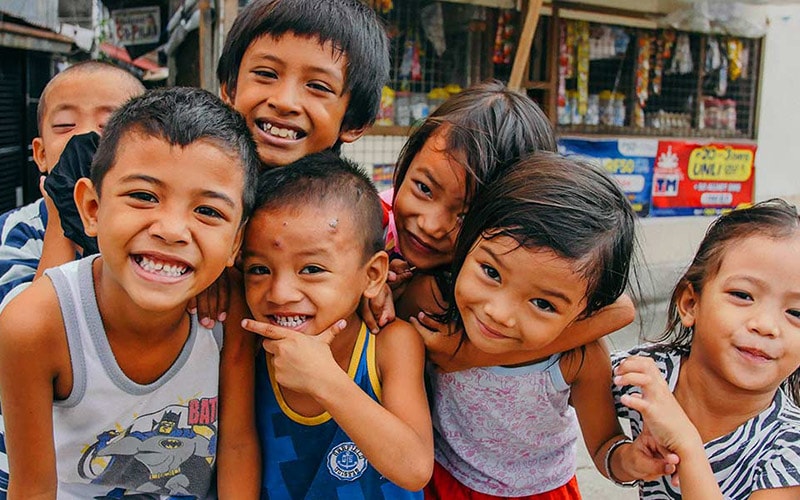 How we can plan for the future

The way urbanisation has been operating is starting to go through a change. This is because authorities in charge of government structures and planning are decentralising, and are trying to become a local collaborative effort involving multiple non-governmental agencies, private partners and philanthropists.

It therefore takes more than just research on past urbanisation policies to lay out the directions for the future. If problems are to be actively solved, past failures in the system cannot be overlooked. 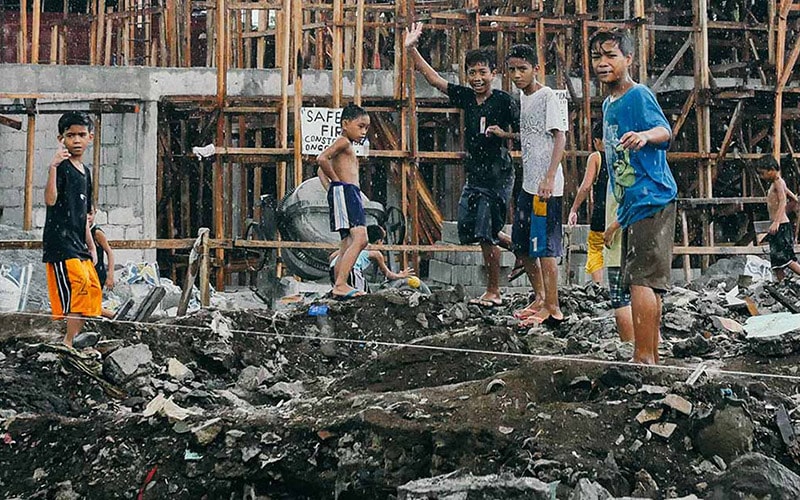 It is important to embrace change but it should be done in the right way. Factors of change, based on economic ideas that seek to disrupt established systems of welfare provisions, should do so only with relevant backup measures. This will ensure that human rights and the broader sustainable development goals are not compromised in the process.

Urbanisation works alongside many other aspects of our environment. Slums, as by-products of urbanisation, are born out of imbalanced outcomes. They are triggered by aggressive policies that tend to overlook the intricacies of the individual’s relationship with the home and the community.